In mid-March of this year, I interviewed Olha Honchar, the head of Territory of Terror Museum in Lviv and the initiator of the Museum Crisis Center. Since the escalation of Russia’s war against Ukraine on February 24th, the center provides financial support to museum workers with difficult life circumstances, as well as those who have financial needs, but continue to work, particularly in hot war zones. We also discussed the Territory of Terror in the context of Ukrainian political events, heritage protection during the war, and how current Russian aggression compares to historical events. Although we spoke in March, the problems in Ukraine remain urgent. The interview was lightly edited.

Could you tell me about the work you do at the Territory of Terror Museum?

I am the head of the museum and I administer and coordinate all of the departments – so, the fund work department, the information department, the department of development. I also participate in the creation of the museum’s concept and I am a representative for it. The Territory of Terror Museum is small, we have a small team, and we are all involved in solving various problems. In times of crisis – COVID or war – I must quickly come up with plans for survival.

Why was the museum founded? Was its curation influenced by Maidan and the events since?

The museum was founded by the Lviv City Council in 2009 and it is based on the oral history of people who experienced repression and deportation, mostly from Lviv and Western Ukraine. Initially, it was planned that our museum would be located on the premises of the Prison on Lontskogo Street [a former detention center used primarily for political prisoners]. However, then the Prison became a national museum, and the city wanted to have its own museum related to this topic. If at the beginning of the Territory of Terror Museum, [it focused mainly on] experiences in Lviv and Western Ukraine, after Maidan in 2014, it became clear that in addition to our local experience, there was a need to explore the experience of other peoples – Poles, Jewish people, and other ethnic groups – that were repressed. Lviv is a multinational city, and the Nazi and Soviet terror concerned not only Ukrainians or residents of Lviv. The Revolution of Dignity was the turning point when we began to look at this history more broadly – not through a national or religious perspective, but through a human one. We explore human beings at times when darkness is thickening, and what they choose to do – to become righteous in the world or a collaborator, kill or save, or perhaps just wait for better times. It is likely because the Revolution of Dignity showed the international dimension of Ukraine that we began to see ourselves as not just a post-Soviet, a post-colonial, or a post-totalitarian country, but as a subjective and independent state.

The museum focuses on violence and terror. How has the history preserved there shaped the response to the Russian invasion? Do you think there are parallels right now to past events?

In our museum there are about 400 interviews that show the experiences of people repressed in the USSR, mostly Ukrainians. Particularly, we have the stories of Ukrainian artists who were persecuted for not adhering to the canons of Socialist Realism, or for nationalism, as interpreted by the USSR. These stories demonstrate the Soviet Union’s desire to destroy Ukraine. And Russia, as the successor to the Soviet Union, retains this longevity. Our witnesses always say that Ukrainians who speak Russian perfectly are those who came from exile, and their Russian is the language of their life abroad, they learned it because they had to survive. It also shows that the Russian language in Ukraine is part of a plan to persecute Ukrainians, as well as a way to survive extermination.

In my opinion, the current events are part of a long plan to destroy Ukraine. The idea of invasion on February 24th did not arise spontaneously, today or yesterday, it is a continuation of the Russian-Ukrainian war, which has lasted more than a hundred years. But the methods by which this war is waged cannot be compared with other wars, because a new form of evil emerges now. After all, all international agreements – to not shoot at doctors, cultural sites, or residential areas – are not followed. What Russia is doing cannot be called ‘Nazism’ or ‘fascism’, it is a new evil for which a term has not been coined yet. The established security system, to which we were used to in the second half of the 20th and early 21st century, does not work. The Minister of Reintegration of the Temporarily Occupied Territories of Ukraine, Head of the Coordination Headquarters for the Treatment of Prisoners of War, Iryna Vereshchuk, said yesterday that the Red Cross is afraid to come here, that the UN mission is not effective. We see the Russian military firing on humanitarian corridors, stealing humanitarian aid, shelling maternity houses and hospitals: this is the new face of evil.

Therefore, after the victory, our museum will have a lot of work to [record] and note it, but now we are busy with different work.

What are you focusing on currently?

First, [our heritage protection work focuses on] the preservation of the Museum’s Territory of Terror collection and strengthening our security through cooperation with international donors. Secondly, on March 3rd, in partnership with various public organizations and partners of our museum, I founded the Museum Crisis Center. As I was in contact with the directors of the museums who came under air strikes, I realized that museum workers in these regions were left without any resource to survive, and many were not paid. When they started bombing, it turned out that there was no money. We immediately started monitoring the needs of museums and museum staff [to see] who requires funds for basic needs and how much. We started looking for people who can provide these funds and linking those who can help with those who need help. During the first 15 days of war, we supported 36 museum institutions in eight regions, which includes 194 people. [The infographic below gives more recent numbers.]

The Museum Crisis Center now covers priority needs without the cumbersome bureaucratic procedures of public authorities, and further we consider the work of the center as an initiative to preserve cultural heritage. 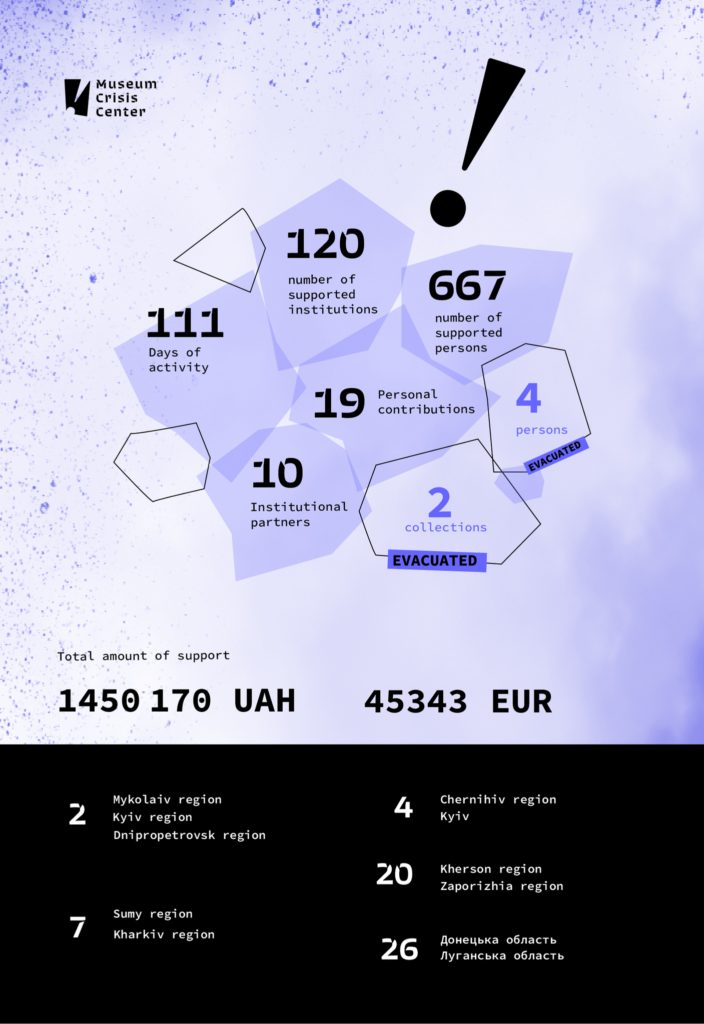 What is at stake in the war in relation to culture?

At stake now is not only Ukrainian cultural heritage, but also world heritage, which is stored in the collections of Ukrainian museums. Imagine a country in the heart of Europe, a culture, an identity, whose history they are trying to erase completely and leave [in its place] a white spot. At a UNESCO conference, one of the directors of the Ukrainian archives said that the Russian invaders were directly bombing the archives containing documents about the crimes of the Soviet regime. Thus, truth and historical justice are at stake.

What does your everyday life look like now? And the lives of your colleagues, either at the Territory of Terror or elsewhere? Are people endangering themselves to protect collections?

I work 24 hours a day, but I also don’t forget about my daily routine and taking care of myself – I drink vitamins, go to massages, exercise, get manicures – everything is under control. My family was evacuated from Brovary, so we are now a large group of people living in a small apartment. There are days when it’s very [busy] – I do five interviews a day in foreign languages and have many other challenges – and there are calmer days, but [even then] I’m involved, settling requests.

The team of the Territory of Terror Museum is mostly engaged with the museum – they work in the office and respond quickly to all the challenges of war and new forms of work, no one has left the country. But there are those who volunteer. For example, our historian Liana Bleharska heads the humanitarian headquarters in Zhovkva, and we do not distract her with office work. There are no threats to our museum [comparable to those posed to] the museums in the occupied territories or under air strikes. Only two days ago [on March 13th] the Yavoriv test site was bombed near Lviv. I know that the director of the Kharkiv Historical Museum and most of the team work in a city that is watered with lead from the sky every day. Why are they there? First, because it happened too fast, and even if they wanted to evacuate, they couldn’t. And secondly, because they love their museums and understand the value of the collections.

Is there anything important you would want an international audience to know?

The world must understand that Russia is not at war with Ukraine, but with the entire world. And if your people pretend they don’t care, Russia will come bombing you tomorrow.

Olha Honchar is a culturologist, a project and communications manager, and an anti-crisis manager. She is Director of the Memorial Museum of Totalitarian Regimes, “Territory of Terror”, in Lviv. She researches the features of PR and cultural and museum management in Ukraine, in particular in regional contexts. She is also the communications expert of the projects “Cultural diplomacy between the regions of Ukraine“ in the frontline and liberated cities of Donetsk and Luhansk regions, the project “The museum is open for renovation“, and the expedition “HERE AND THERE“, among others. She co-curator the experimental exhibition on the Anti-Terrorist Operation at the Luhansk Regional Museum in Starobilsk and is the initiator of the Museum Crisis Center and the Ambulance Museum project, which emerged in the first days of the Russian war against Ukraine.