From August 20 to 28, the 26th General Conference of the International Council of Museums (ICOM) was held in Prague, at which one of the central topics was the protection of the cultural heritage of Ukraine during the Russo-Ukrainian war.

Good afternoon, my name is Olga Gonchar, I am the director of the Memorial Museum of Totalitarian Regimes “Territory of Terror” in Lviv and the founder of the Museum Crisis Center.

Ukraine was represented at several events at the conference, in particular within the framework of the round table Museums on the frontline, homefronts, conflict zones and areas of peace. In the program of the meeting of SE Europe museums, Olga Gonchar, the director of the Museum “Territory of Terror” and the initiator of the creation of the Museum Crisis Center, together with Olesya Milovanova, the director of the Luhansk Regional Museum of Local History, were to talk about the Museum Crisis Center and the experience of cooperation between the Territory of Terror Museum and the Luhansk Regional Museum of Local History during the war.

Due to changes in the program, Olga Gonchar did not manage to present her report at the #ICOM2022 conference. That is why we are publishing the text here.

Early in the morning on February 24, while in Lviv, I woke up to a call from my mother from Brovary near Kyiv. She said that our city was hit by the first Russian missiles. The next person who called me was Olesya, the director of the Luhansk Regional Museum from Starobilsk, Luhansk Oblast: “Olya, a war has begun in Ukraine.”

I told my mother and my colleague to go to Lviv immediately. My family arrived in 26 hours along a route that was constantly shelled. Normally this road would take 5-6 hours. Russian tanks entered Starobilsk in a few days, Olesya spent a month under occupation, and only in April, in 3 days, she and her young son, with the help of the Ukrainian military, reached Lviv. Currently, the Luhansk region and its museum are fully occupied.

A few hours later, on February 24, not yet realizing the full horror, but having come to work, we at the “Territory of Terror” museum took primary safety measures: we taped the windows, buried the most valuable exhibits, put everything that could fall on the floor, began uploading data to the online storage, updated the list of priority exhibits, as well as data on members of the museum team – addresses, numbers of contact persons in case of lack of communication, discussed the potential possibility of receiving internally displaced persons from other regions at home.

Among other things, we still had time to buy a generator, gasoline, water barrels, and medicines. It was difficult to get these goods within a few hours.

From the first hour of the war, my colleagues decided to combine volunteering for the army and civilians, and work in the museum to preserve the collection – I did not object.

Someone went to work in volunteer warehouses with medical cameras and military ammunition, someone went to the train station, where every second people arrived from Kharkiv, Kyiv, Chernihiv, Sumy, who were the first to fall under the bombs of Russian terrorists, someone started sewing military first-aid kits or making Molotov cocktails.

We immediately had meetings with the local self-government: the Department of Culture of the City of Lviv (this is my direct management) and the Lviv Regional Council. The meetings were attended by all heads of museums and other cultural institutions. We discussed the priority security measures of each institution, calculated the free spaces for receiving collections from other regions, the possibility of organizing overnight stays for people in cultural institutions.

In the first days of the war, Lviv turned into a large shelter – there were places for temporary shelter of people or centers for distribution and reception of humanitarian aid in theaters, libraries, and art centers. Museum workers helped in the museum – they accepted collections and people.

It should be noted that from the first days of the war, calls began to arrive from old and new foreign partners regarding the provision of assistance to museums. The ALIF Foundation and Polish colleagues were the first to call, because at the time of the war, we had neither packing materials, nor boxes for evacuation, nor fire extinguishers in the required quantity.

The field of culture has always remained underfunded, and this became very noticeable at the time of the war. We would not have managed without the support of international partners.

On March 3, I wrote a post on Facebook on the topic of helping those who remain in Ukraine in their museums, because many opportunities and support have appeared for those who go abroad. And it was and remains important to preserve people of culture in Ukraine, because they are the bearers of unique knowledge and those who create meanings.

This is how the Museum Crisis Center was born – an initiative administered by two public organizations, the NGO “New Museum” and the NGO “Other Education”. The primary task from February 24 until now is to provide quick museum aid – emergency financial support for museum workers who find themselves in hot spots and difficult life circumstances, but continue to work in their profession.

It is worth noting that most of this aid is “eaten up”, or goes to basic things for life. This is relevant for the occupied territories, where people are on the verge of survival.

Work of the Museum Crisis Center

What are we doing? We collect funds and distribute funds through our network, which is collected by the MCC monitoring group through individual contacts. Until July 26, we supported 758 (seven hundred fifty eight) people from 148 (one hundred forty eight) museums in 10 regions of Ukraine for a total of UAH 1,726,170 (one million seven hundred twenty six thousand one hundred seventy).

The format of providing emergency financial assistance to museum workers remains relevant even today, because inflation has started in our country, and the government has started an austerity policy, which has hit the financial support of the cultural sector even more.

New areas of work of the Museum Crisis Center

Among the new directions of the work of the MCC – requests for financial aid for the personal evacuation of people of culture from the occupied territories, because people of culture there are blacklisted – they are persecuted, kidnapped, tortured, killed. Teachers of the Ukrainian language, which is now banned in our Ukrainian cities, and museum workers are especially targeted by Russian terrorists. Ukrainian books are burned. Collections from Ukrainian museums are looted and taken to an unknown destination in Russia.

Among the new areas of work that appear before us, we consider it necessary to continue providing emergency financial assistance, in particular for the personal evacuation of museum workers, to implement a system of scholarships for longer-term support of cultural leaders, to launch a line of psychological support for cultural workers and teams that help others, to launch a site about museums of Ukraine with the possibility of making personal donations.

Work with Ukrainian partners of the Museum Crisis Center

Thanks to cooperation with our partners – the Museum of Folk Architecture and Life in Lviv named after Klymenty Sheptytskyi, 21 Ukrainian museums have already received the opportunity to additionally secure stock collections, for a total amount of about UAH 5,000,000.00 (five millions), to receive packing materials and evacuation chests.

Our partners Dnipropetrovsk National Historical Museum named after D.I. Yavornytskyi in the city of Dnipro turned the museum into a humanitarian hub of assistance to the military, civilians, museums of the region and museums in evacuation, so we cooperate with colleagues to meet the needs of this region.

The “Territory of Terror” museum sheltered the evacuated team of colleagues from the Luhansk Regional Museum of Local History. We helped our colleagues restore their financial, administrative, and programming activities. Together we collect the “Victory Collection” – exhibits from the front line.

Currently, the “Territory of Terror” Museum is closed to visitors, among other things, the museum complex is located near a railway track, which is an additional danger. The exposure is hidden, but we continue our work. We are focused on preserving our achievements and strengthening the security measures of the museum’s funds and premises.

Thanks to international support, we uploaded our data to the online storage, purchased technical means for saving digital data and mobility of work, strengthened the supply of funds with cabinets, office security (mounted protective blinds, installed grids, video surveillance system). In September, we will begin 3D scanning of the exposition and main exhibits to preserve our efforts.

We are preparing for winter and the heating season with fear, because there is a threat of the destruction of the infrastructure by Russian bombs, and the responsibility for preserving the collections remains with us. We are buying firewood and logs, but we don’t know how long the winter will be.

Among other things, we are preparing for the threats of chemical and nuclear weapons – we have received training from emergency response services, with the support of partners, we are purchasing personal protective equipment – respirators, rubber boots, disposable gowns, gloves, shoe covers, shower caps, wet wipes, and medicines.

Problems of the museum industry

The war in Ukraine clearly showed the internal weaknesses of the museum industry:

Regarding the international context: the war in Ukraine clearly showed the old rules, the existing methods and agreements at the international level regarding the preservation of heritage do not work, we all need new real solutions and protocols, and the world community, in particular the museum community, must finally admit that everything that is happening in Ukraine is true , not a fake, and Russian bombs do not fall on Ukrainian museums for no reason.

From the “good news” – the sector of public organizations and initiatives, small museums, have taken on the “role of the state”, in particular with regard to supporting occupied museums and front-line territories, and are still helping their colleagues to survive within their capabilities, but this would not be possible without the help of international partners.

It is worth emphasizing that all the activities and work on creating new meanings listed by me takes place in conditions incompatible with normal human life – there are no safe cities left in Ukraine.

We live with constant air alarms, news about the murders of Ukrainian civilians, women, children, soldiers, prisoners of war, even animals, photos of the destruction of our cities, videos of burning wheat fields, which our military and farmers continue to harvest under fire to save the world from hunger , destroyed museums and looted museums – this is a constant life and work in the world of daily terror, which is implemented by the Russian terrorist state.

Threats of nuclear and chemical attacks have been added to the current worries, and this is already a matter of world security. All known world security arrangements and rules of war do not work. The old world no longer exists. The Russian terrorist state implements a policy of daily terror in Ukraine – a genocide of the Ukrainian people is taking place in the heart of Europe.

Methodical genocide. And culture, cultural heritage, people who create meaning, were under threat of physical destruction.

We want to survive, survive the winter, not die of hunger, live, and be people with a human face from planet Earth. Strange plans for the 21st century, isn’t it?

To prepare exhibitions in Ukrainian theaters, not torture chambers for the public trial of Ukrainian soldiers, which Russian terrorists are currently preparing in occupied Mariupol.

And that is why each of us will continue our small front, in our case – a cultural front, not without your help, because today Ukraine is fighting not only for itself, but also for all people from Planet Earth – for food in Africa, for oil in Europe, for no one to blackmail you with gas bills or threats of a nuclear explosion simply because you chose freedom and the right to be yourself on your own land, for everyone. 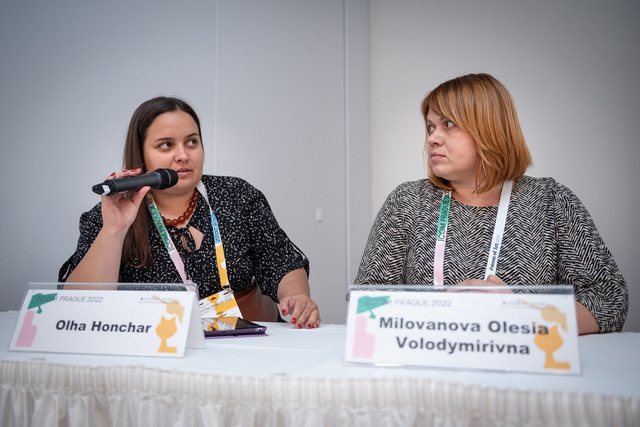 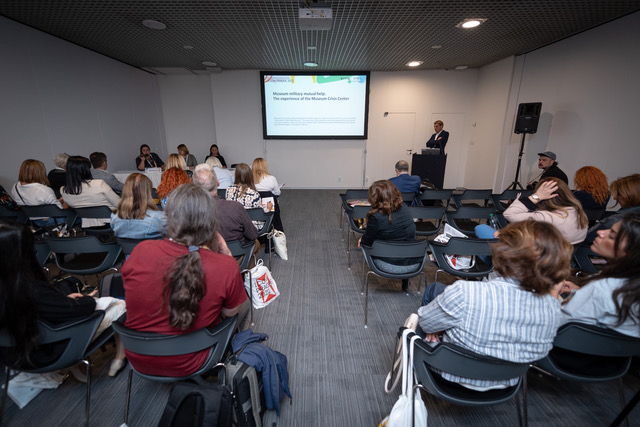 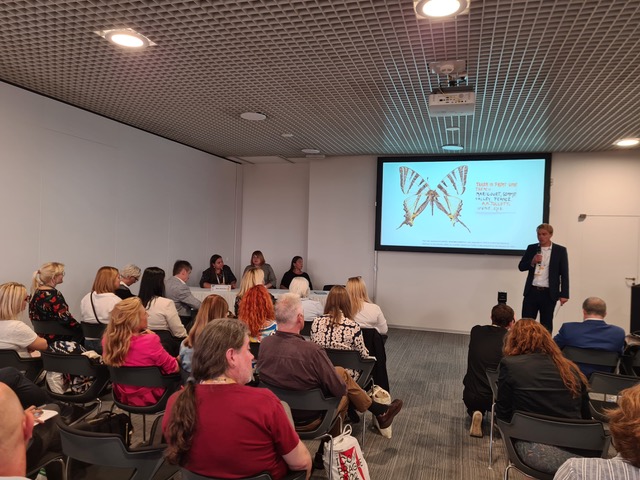 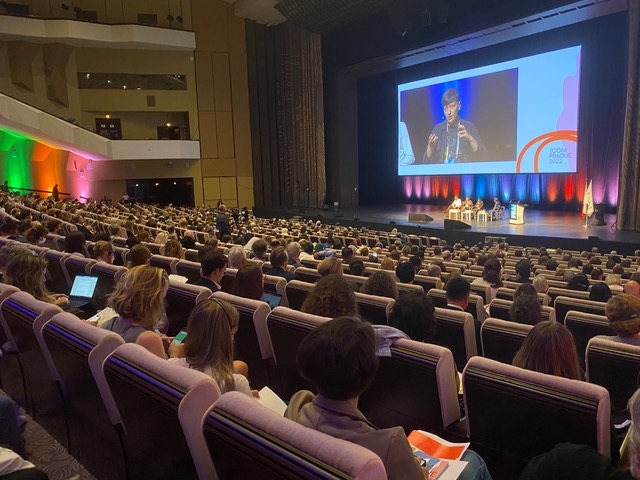 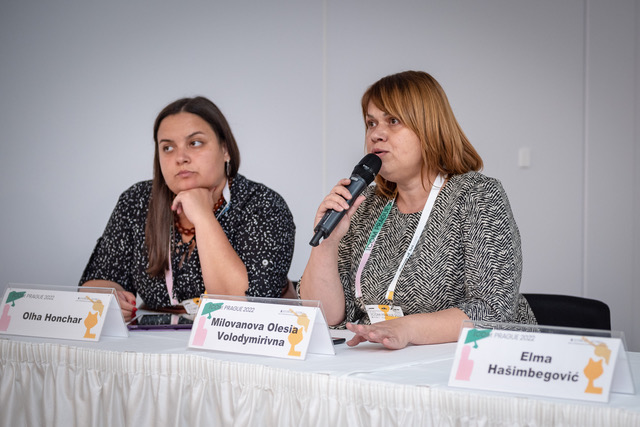